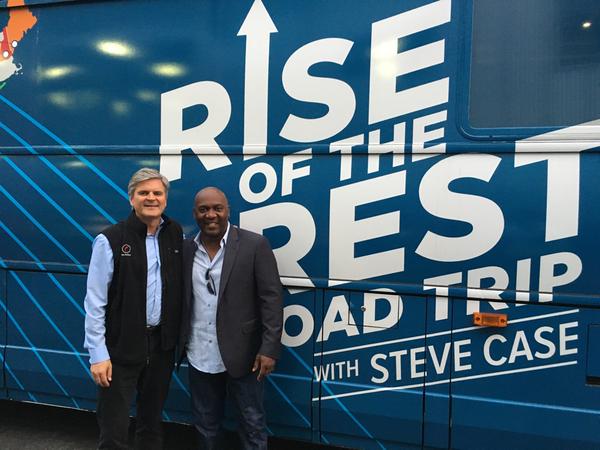 Innovation drove growth in cities like Buffalo, Detroit, Cleveland, and Pittsburgh in the late-1800s and early-to-mid-1900s.  Even today innovation is happening across the country in startup communities, with places like Silicon Valley and Austin grabbing the spotlight frequently. However, smaller communities like Buffalo are on the rise and being recognized on a national stage for the first time in a while.

Buffalo is fortunate to be part of the Rise of the Rest Road Trip with Steve Case.  If you don’t know of Steve, simply Google his name – the highlights are he was Co-Founder of AOL, negotiated the largest merger in business history, and now runs a successful investment firm in Washington, D.C. called Revolution...to name a few.  Steve’s road show includes day trips to Baltimore, Philadelphia, Buffalo, Manchester, and Portland, where he gets a crash course in each location’s startup ecosystem, meets with local and regional entrepreneurs, leads a pitch competition, and culminates with a celebration of the startup community.

While the startup community is only one component of Buffalo’s resurgence, it plays a critical role in driving sustainable economic revitalization for one key reason: job growth.  Smaller lifestyle businesses and large publicly traded companies, have one main thing in common – relatively flat net job creation.  The real driver of net new jobs in both macro and micro economies is in startup and high growth companies.  Sure, some startups will fail; businesses in all life cycle phases fail all the time.  But some will succeed, driving substantial and sustained job creation in the new economy, leveraging new technologies, and embedding skills in an advanced workforce.

Solar City is in many ways the biggest symbol of Buffalo’s economic resurgence, yet has only existed since 2006. They are poised to create over 2,000 jobs over the next two years in our city alone.  In addition to relocating people from outside of Western New York, they will also be retraining and redeploying hundreds if not thousands of under or unemployed in our workforce.  For every Solar City, who has successfully disrupted a mature industry in need of innovation, there are hundreds of startups, leveraging technology and new ways of thinking to evolve analogue or stale industries and markets. These companies are and will continue to be the driver of meaningful net new jobs in Buffalo and in the broader US economy.

So to you, Buffalo, ultimately I say: embrace the foundation of your past triumphant splendor.  Look forward, not back, and foster innovation to drive sustained success.