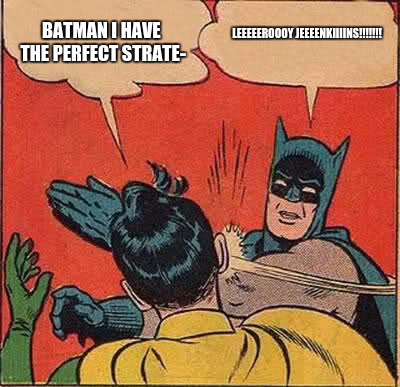 Alignment.  It’s a simple concept, but an important one; the extent to which it exists or doesn’t is often the most critical factor in whether or not a team succeeds or fails.

The battle cry “Leeroy Jenkins!” was made famous a few years back after a YouTube video of a group of friends playing the online role-playing game, World of Warcraft, went viral.  In the clip, the team is laying out an intricate strategy and tactical plan of execution for how they will defeat the many foes they are about to encounter in the next phase of the game.  All the while, one of their team members, Leeroy Jenkins (played by Ben Schulz), was away from his computer getting something to eat.  Upon his return, he simply shouts “Leeroy Jenkins” and darts into the room; his comrades, now startled by this sharp deviation from the plan, follow him in shortly thereafter where they are quickly vanquished.  CAUTION: the following video contains some profanity aka NSFW.

What can we learn from Leeroy Jenkins?  The best crafted plans are likely doomed to fail if the entire team isn’t on the same page.  Alignment issues can fester due to poor communication, lack of consistent values and intentions, or just poor timing. In the case of Leeroy Jenkins, poor Ben was away from his computer fixing himself a snack, thus the team's plans were dashed by bad timing.  But how can we avoid the things that destroy great plans?

Align Team Values
Build a team that truly sees eye to eye regarding values and a shared vision.  If one or multiple people express different values or a vision inconsistent with the group it will derail plans.  Unfortunately, company culture is often the first thing to suffer. Misaligned team members will seek to validate their viewpoints, thus further dividing the team and disconnecting people from the company's purpose.  Best case scenario, this will slow the group down from achieving its goals.  But far worse, goals can become clouded, relationships fractured, and turnover can surge.
Communicate with Transparency

Values are very important.  Shared vision is necessary.  Strategy is too.  But none of these mean anything unless they’re appropriately communicated to the team and reinforced consistently.  This is common sense, yet this is probably the most pervasive area of disconnect I’ve seen on teams I’ve been part of through the years.  Leaders need to make sure everyone is on the same page.  Team members need to provide upward feedback and interact in meaningful ways with their colleagues.  But all team members need to recognize their individual role in fostering a culture of transparent communication in order to advance the plan.

There is always the risk of over-analysis and over-engineering things.  Sometimes the Leeroy Jenkins’ of the professional world wins the day, surviving the onslaught of impediments and challenges, but far too often at the expense of their colleagues and teams as a whole.  Make sure the teams you’re on are aligned and communicate with ease, and you’ll increase the likelihood of achieving your goal.